Note:  This page will be reserved to highlight clergy and parishioners.  We want to highlight their stories, achievements and accomplishments, successes and memorable experiences of the members and families of our church.  I encourage you to submit appropriate information to my email in order to be posted on this website. 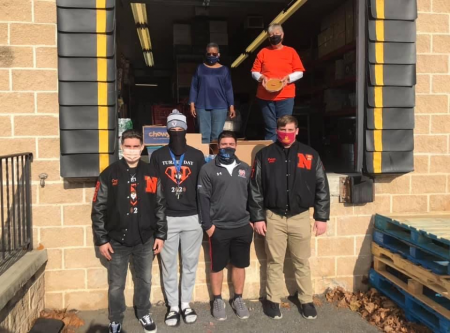 The Northampton Area Senior High School Konkrete Kids 2020-2021 Football Team Seniors dropped off Thanksgiving food items for the Northampton Food Bank. Thank you, guys!!  ...And a HUGE thanks to all of our parishioners who donate their time volunteering, donating, and/or transporting donations!  (Kathy Crayosky is dressed in an orange shirt! Congratulations are in order for Vladimir and Emma Krasnopera, who are celebrating their 73rd Wedding Anniversary (November 15, 1947!)  MNOHAYA LITA! MANY YEARS!

Anectdote:  Emma relayed her recollection of the day to me - "On our wedding day, 73 Years ago, the weather ws not kind to us.  It rained, hailed, ending up snowing, but everyone showed up.  There were about 200 guests, plus my brother Ed brought his entire footbssll team to the reception!  We had lots of food, and Baba made sure everyone had chickne soup which was homemade since she had chickens on the farm."

Celebrating Taras and Rosemarie Pypiuk's 60th wedding anniversary (October 8th, 2020). These two are married the longest of all couples in our parish family. Congratulations are in order for 50th Wedding Anniversary for Protodeacon Mikhail & Pani Martha! It is Golden!   MNOHAYA LITA! MANY YEARS! Congratulations are in order for 50th Wedding Anniversary for John & Linda Vitushinsky! It is Golden!   MNOHAYA LITA! MANY YEARS! Congratulations are in order for Protodeacon Mikhail Sawarynski in honor of the observance of the 16th Anniversary of his Ordination by Metropolitan Antony.  CONGRATULATIONS, PROTODEACON MICHAIL! MANY BLESSED YEARS! Congratulations to Sabrina and Justin Ost!  Sabrina won 3rd place and Justin  scored a first place in the “2019 Essay Contest”: “Train up a child in the way he should go, even when he is old he will not depart from it”(Proverbs).

You can read their essay in the church hall - Great job! I was born on December 22, 1989 in the town of Dubno in Rivne refion (ethnic region – Volyn’). My parents told me that I wanted to become a priest from childhood. During my school education I attended group of sport tourism. I used to go to the Church with my family. At the age of 13 years, I became an altar server in one of the local churches. It has always been considered as a very honorable and responsible service in our town. I loved to do it very much. It was too early to talk about a full understanding of the Orthodox services. From my experience I know that participation during church’s services gives some understanding of its meaning from an early age. Children perceive everything through the five senses, and our Orthodox rite allows us to experience worship through all the senses. As an altar server, I was involved in a brotherhood of youth. It made possible for me to get acquainted with Orthodox Christian youth from all over Ukraine. It was very important to experience a fraternity that could probably be compared to early Christian communities (even though it was only few days). We used to spend time in the nature.

During my last years of school, our parish’ priest was preparing me to attend the Seminary. In 2006 I started my studying in the Rivne Theological Seminary. It was the first and very important spiritual school at the beginning of my journey. During my first two years of studying, I gained general knowledge about my Faith, the Eastern Orthodox Rite, and the concept of the importance and seriousness of the priestly vocation. I experienced the life in a large community of seminarians. We had an opportunity to stay at the monasteries during the summer time, in order to practically try what it really means to be a novice in the monastery. It was an unforgettable experience. I kept the life in the world and spent few weeks in calm and prayerful atmosphere.

For the last two courses of education I was transferred to the Kyiv Orthodox Theological Academy. After moving to the capital, I also started to study at the University Of Tax Service Of Ukraine in Irpin (Kyiv region) as the part-time student (as a full-time student I was in the Seminary). The Kyiv Academy taught me basics and first practices of public speaking and preaching, which is the necessary skills of future ministry. Also, I got all different knowledge which was necessary to finish my seminary and get a bachelor's degree.

Immediately after the seminary, I was called to Ukrainian Armed Forces. It was my duty. I served in Kyiv for one year. It was an important experience in my life because the army teaches discipline and a sense of duty. I was a driver during the service. After the service I worked as a sales representative in the city of Rivne. This job, first of all, taught me of the experience of working with people, which I needed in my future ministry. Also, it gave me an opportunity to explore my native Volyn region. During that job, I graduated from Tax Service University with a Master degree. Although I have never worked as lawyer, it has provided me with the necessary skills to understand Ukrainian laws and other general disciplines, which were not taught in the seminaries.

I had the opportunity to spend several years in Europe. It gave me the possibility to study Polish and French languages. After getting married, I decided to continue the way of the priesthood. After learning about St. Sophia's seminary, I decided to try. After the successful interview with Archbishop Daniel and passing the exam, I was accepted as a student and arrived to study in the United States. Because I finished the Seminary in Ukraine, I was allowed to confirm my diploma. In December 2018, I was ordained to the deaconate and in June 2019 to the priesthood. Since September 2019 I have been assigned to the Holy Assumption Parish in Northampton.

My name is Olha Kravchenko, maiden name is Beizyn (Бейзин). I was born on February 26, 1994 in the 35 thousand population’s beautiful Ukrainian town of Dubno in Rivne region (Дубно, Рівненська область) in the family of private entrepreneurs Ruslana and Vitalii. When I was a little girl, I liked helping my parents in their candy shop called “Squirrel” («Білочка»). During my studying in secondary school-gymnasium in 2005-2010 I was a member of gymnasium choir.  In 2008-2010 I was chosen as a gymnasium president. In 2009 I was representative of the Rivne region in the organization of “Ecological custody” in the Ministry of Environmental Protection of Ukraine in Kyiv. In 2010 I had practice training in the Accounting Department in the provincial economic cooperation in Dubno, and I was also a journalist trainee in the redaction of the local newspaper “Skrynia” («Скриня»).

In 2010 I graduated from secondary school and went to Poland to study at the Warsaw Academy of Management and graduated in 2013 with a Bachelor in the International Relations. In 2012 I obtained the title of the Miss Euro Football 2012 Poland and represented Poland in the promotional video in Kyiv for Euro 2012 Poland-Ukraine. I started at the SWPS University of Social Sciences and Humanities (also in Warsaw) in 2013 and graduated in 2016 with a Bachelor in Asian Studies and diplomacy. During my studies, I participated in “Work and Travel Student Program USA” and went to Rehoboth Beach, DE to work during the summer of 2014 in a Mexican restaurant. In 2015 I received a scholarship at the College of International Education in Capital Normal University in Beijing, to study an accelerated Chinese language course for one semester. During my course in China, I had the opportunity to practice in the Embassy of the Ukraine in Beijing, in the Cultural Development and Sales Department. I also became a short-time practice assistant in JUMA Company where I was helping in the preparations for a three day International Petroleum and Petrochemical Technology and Equipment Exhibition. As a volunteer at the Chinese school I was teaching 3-7 year-old kids English.

After coming back to Poland and graduating from SWPS University, I started to practice in Sino-Polish Economic and Cultural Society in Warsaw in the Consulting department. Later I started my private Chinese and Polish lessons tutoring. From 2017 till 2018 (when I came to the USA) I was working in the BGZ BNP Paribas S.A. Bank in Warsaw as a specialist in customer service.

After my 2016 graduation, Oleg and I had a civil marriage ceremony on August 11, followed by a church wedding on August 12. Since July of 2019 I work full-time as a mommy and support my husband Fr. Oleg as a newly ordained priest here at the Assumption of the Virgin Mary Ukrainian Orthodox Church in Northampton PA.

Deacon and his Grandsons Deacon and His Grandsons

Photo of Protodeacon Mychail Sawarynski with his faithful grandsons who are altar servers in our church.  From left to right, John, Andrew, Deacon Mychail, Anthony, and Gabriel Winners in the 2018 UOL Essay contest

Sabrina took the top spot , winning a beautiful icon, and honorable mentions for Justin, Alexandra, and Danica.  Father Myron called it a “clean sweep” by the Ost family! CONGRATULATIONS are extended to the newly illumined servants of God, Forrest Jack Pozzetta and Nicholas Joseph Parchomenko, who were born anew to a life in Christ through the Holy Sacrament of Baptism and received the "seal of the gift of the Holy Spirit" through the Holy Sacrament of Chrismation. May God grant to Forrest Jack and Nicholas Joseph, their parents, grandparents, and Godparents, a prosperous and peaceful life, health, and furtherance in spiritual growth and preserve them for many-many- blessed and joyous years.

Parishioner\'s Corner
Featuring Parishioners from our Congregation
NEW:   Jasmine Pavlinsky graduated from Northampton High School in June (2017).  (See Jasmine and a famiy pic above) She continues her education at Moravian College!
CONGRATULATIONS TO RACHEL KESLOSKY, daughter of Mr. & Mrs. Joseph Keslosky who graduated from Millersville University in 2017!

At the young age of 37, one of our parishioners, Robert Pavlinsky, began wrting poetry.  He writes and publishes inspirational poems. See his website at: http://pavlinskypoems.com.

ORTHODOX SCOUTING AWARDS:
The Chi-Rho Award.
Recipients: Justin Ost, Gabriel Sawarynski
Awarded to an Orthodox Christian boy or girl who is registered as a Cub Scout, Girl Scout Junior, or in a Camp Fire program. The recipient must be in the fourth or fifth grade and must attend church school or other formal religious instruction program.

The St. George Award.
Recipient: Alexandra Ost
Awarded to a registered Tiger Cub, Cub Scout of the Wolf Rank in the Boy Scouts of America, or Brownies in the Girl Scouts of the U.S.A., in the 1st, 2nd, or 3rd grade. Must also be a communicant member of an Orthodox Christian Church recognized by the Canonical Assembly of Orthodox Bishops in the U.S.A.
MNOHAJA LITA!    MANY YEARS!


Thanks are extended to Mr. Taras Pypiuk for constructing the method of hanging the lamps.

The Enthronement of Metropolitan Antony

VIew the TV edition (in Ukrainian) of the Enthronement of His Eminence Antony at: http://ukrainianorthodoxchurchusa.org/news_130128_1.html (Note: Father Bazyl makes a cameo appearance!)