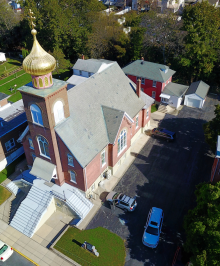 The first Ukrainian immigrants began arriving in the Northampton area at the turn of the century from Western Ukraine – Podila, Zbaraz, Lemkivshchina- attracted to the rapidly developing garment and cigar factories, and, mostly to the vast growing cement industries of the area.

In 1920 many of the new immigrants met for the purpose of organizing an Orthodox Ukrainian church in Northampton. Initially services were held on the second floor of Onuschak’s Hall, a local gathering spot. A decision was made to purchase a plot of land on Newport Avenue at a cost of $1,400.00. On September 25, 1921, a newly erected church was dedicated as the Ukrainian Greek Orthodox Church of the Holy Virgin and blessed by its first pastor, Very Rev. Leon Kushnir. The entire cost of the project was $18,000. On January 9, 1922 a charter was issued and the church was incorporated as the Independent Ukrainian Greek Orthodox Church of the Holy Virgin in Northampton, PA.

In 1921, land on Main Street in Northampton was purchased for $3,000.00 by parishioner Wasyl Koczenacz for the purpose of a parish cemetery and subsequently sold to the parish in 1922 for $1.00.
Through the efforts of Father Kushnir, a Ukrainian school and church choir were organized and monthly theatrical performances were presented to raise funds to pay off the church debt.

In 1928 the Sisterhood of Faith, Hope, and Love was organized. Their moral and financial support throughout the parish’s early years and continuing to the present day has been invaluable and life sustaining to the parish.
In spite of the Great Depression the parish managed to survive and in 1932, under the capable leadership of Very Rev. Dr. Volodymyr Klodnycky and with manual labor of the parish membership, a parish residence was erected at a cost of $1,200. In 1945 a dual celebration was held – the end of World War II and the burning of the church mortgage!

In 1950 Very Rev. Stephen Hankavich was assigned as the parish’s first American-born pastor. In 1961, Very Rev. Andrew Dworakivsky began his assignment until his death in 1976. Throughout these decades much was accomplished – new iconostas, interior renovations, acquisition of the adjoining apartment building, and recordings of the Divine Liturgy in both English and Ukrainian by the Parish Choir under the direction of Walter Dworakivsky.

Beginning in the late 1940’s the Northampton Chapters of the Ukrainian Orthodox League have been active contributors to parish life spiritually and socially. Several members of both Junior and Senior chapters have also been involved nationally and have held leadership roles. National UOL Conventions have been hosted by the Northampton chapters in 1982, 2005, and 2015.

From 1990 until his untimely passing in 2018 the Very Rev. Bazyl Zawierucha had been assigned to the parish. With his guidance the parish had undergone much change – interior renovations, new altars and tabernacle, new iconography, interior elevator and air-conditioning, the gilding of the exterior dome.

Now and throughout its history, the Assumption of the Virgin Mary parish has continued to be strong in Faith, community, and in its effort to be preserved for future generations.