The Nativity Icon of Our Lord 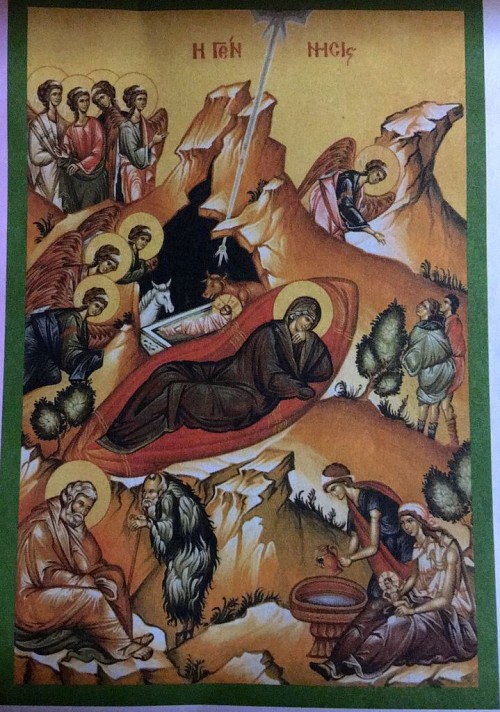 Icons are used by the church to tell the story of an individual or event. In few places is this better illustrated than wit the Christmas icon.  Although it is crowded with pictures, each has a story to tell. The icon portrays the whole scene of the Incarnation, both its spiritual and theological dimension.  If one were to see this icon and understand it, one would have a profound insight into the meaning of the birth of the Lord.

Occupying the central place is the newborn Child, all wrapped in swaddling clothes, while the Mother, the Holy Virgin, reclines close by. They are in a dark cave, from which peaks jut into the sky. The light from heaven pierces down to the earth. The Incarnation involves two worlds – that of eternity and that of time, that of God and of man. And in the birth of Christ we have a fusion of those worlds: we have God becoming man. We see the God-man in all his humility.  He is born in a cave.  Animals watch and wait upon him in silent wonder. He comes at night and the world is asleep to the awesomeness of the occasion.

Still, the newborn Child is the Lord of Creation.  The heavens open and a star points its light at him. The Angels appear and sing out praises to God and Child. The shepherds, awed by the sight and the sound, cautiously approach the improvised cradle. The lower portion of the icon presents some of the drama of the deeper meaning of the Incarnation. Whoever heard of such a thing – God becomes man? It is unbelievable, it is blasphemous. But it happened. God, in taking flesh, submits to the human condition and limitation. To the right, a woman assists in the washing of the newborn infant.

To the left is Joseph, somber and troubled with the events that have come to pass. Doubts cross his mind as he ponders the virginity of his spouse and the birth of the Child. Could this be in truth, the Christ? And there are forces that aid and abet his troubled thoughts. He is tempted by a figure representing the devil, to doubt what had happened.

The full range of human dimension is found in the Nativity Icon. It portrays an event that split time and eternity and bridges the gap between God and Man.  But it all centers around the Divine One that has entered into the realm of humanity.  GOD IS WITH US!