Icon of Christ the Savior 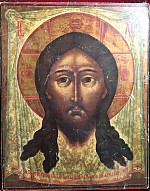 WE THANK MR. TARAS PYPIUK AND THE PYPIUK FAMILY FOR THEIR DONATION OF THE HOLY ICON (PAINTED BY VLADISLAV ADREJEV) 0F CHRIST THE SAVIOUR “MADE WITHOUT HANDS” (ACHEIROPOIETOS) ALSO KNOWN AS THE “ICON OF THE LORD ON THE CLOTH” (MANDILION). It is located in the arch above the iconostas.

The icon has been donated in loving memory of +Volodymyr Pypiuk, father of Taras Pypiuk.

Volodymyr was the son of one of the very prominent priests of our Church, the Mitred, Very Reverend Father Gregory Pypiuk. Volodymyr was a tireless worker within our church as a reader and music writer for the choir. He also served on the church Council and was quick to offer his services toward any maintenance that was necessary.

For many years Volodymyr was a member of the Metropolitan Council of the Ukrainian Orthodox Church of the U.S.A. He was also elected by the Sobor to the Consistory of the Church.

He was an organizer of the Ukrainian Male Chorus of the Lehigh Valley which enjoyed wide acclaim throughout the Northeast over a period of several decades. Throughout his life he tries to emulate being a true Ukrainian Orthodox man, father and grandfather.

A LITTLE ABOUT THE ICON:

The icon is known be many names: Made Without Hands, The Holy Napkin, The Mandilion, it is known in the West under the name of Holy Visage. It occupies the central place amongst the images of Christ.

The tradition of the icon acquired its form in the story of Abgar, king of Edessa, who was said to have had a portrait of Christ painted. According to the Byzantine version, the Edessa image would be an impression of the face of the Saviour on a piece of linen, which Christ had pressed to His face and sent to the envoy of Abgar. Thus the first image of Christ, the “mandilion” was a document “made without hands”, direct testimony of the Incarnation of the Word – the Second Person of the Holy Trinity. Thus Christian iconography – and above all the possibility of representing Christ – has its foundation in the fact of God becoming Man (the Incarnation).

In consequence the sacred art of icons is not a creation of artists: just as the theologian expresses by means of thought, so the iconographer expresses by his art the living Truth, “made without hands”. This is why the Seventh Ecumenical Council (787) gave this icon special attention. To commemorate the definitive triumph of the holy images, it is this icon of Christ that is venerated at the feast of Orthodoxy on the first Sunday of Lent.

For more information on the icon, please attend the adult education class following the Divine Liturgy.